A tag to the episode 'Fugitive'. Bodie almost dies, forcing the boys to reveal the true depth of their feelings for one and other. 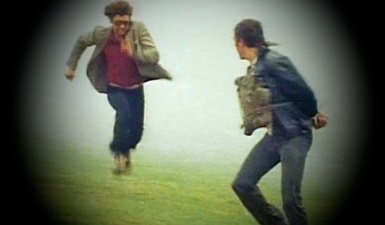 "Come on, Ray, are you going to give me the silent treatment all night? I'm knackered, aching and my head feels like it's about to explode."

Ray turned from the window at Bodie's choice of words and glared hard at his partner before storming into the kitchen. He slammed his empty glass down on the draining board and said, "I'm going home. I just can't look at you right now, Bodie. I'm sorry."

"No, I don't suppose you do." His normally volatile partner uttered the words so softly that Bodie almost didn't hear.

"Just what the hell is that supposed to mean?"

"Nothing!" Doyle snarled, instantly regretting it as he took in his partner's battered and bruised face.

"You're an idiot, Bodie. A bloody minded, selfish idiot!"

"Selfish?" Bodie stepped forward intent on grabbing hold of his stubborn partner and shaking some sense into him when he lost focus and the room whirled. He stumbled into a dining chair and failed to find purchase, hitting the floor with an undignified thud.

"Bodie!" Doyle was at his side in an instant. "You stupid idiot. You should be in the hospital. I don't know how you convinced Cowley that you were OK."

"I am OK, just a little concussed, 'sides, I didn't exactly convince him." He smirked at his partner but Ray was having none of it.

"I might have known. Right, I'm calling the doctor."

"Put it this way, sunshine, you either let me call the doctor or I call Cowley and he'll have you in the hospital so fast your feet won't touch."

"Thought you'd see it my way. Come on then, let's get you settled first and then I'll give the doctor a bell." Doyle eased his partner up from the floor and guided him gently to the bedroom. "Let's get you out of these clothes."

"Knock it off, Bodie. I'm not touching you 'til you're better so you can get that idea out of your head for a start."

Doyle's expression changed instantly. He helped his partner into bed, pulled the blankets up snugly around him then left the room without uttering another word.

"Ray?" Bodie pushed the blankets aside, sat up and eased himself toward the edge of the bed. He took a careful breath as his ribs protested the movement. "Ray?" he called again. He was becoming anxious at his partner's sudden change in demeanour. What the hell have I said now? he thought.

A moment later he heard the phone receiver being slammed back into its cradle and his irate partner returned with a face like thunder. "You!" he raged. "Apparently, you were supposed to go straight to casualty. The Cow 'imself offered to take 'his blue eyed boy', but oh no, you say, 'It's OK, sir, Doyle can take me, sir'. Oh yeah, Doyle can take you alright but you didn't bother telling Doyle that did you? Instead you pull a fast one again and leave me carrying the can. You probably do have concussion, Bodie and possible broken ribs and I dread to think what else." Doyle grabbed Bodie's clothes and threw them at his partner. "Get dressed, I'm taking you to the hospital."

"Just...leave it, Ray," he gasped as fresh pain shot through him. "There's no bloody point spending the rest of the day waiting to be seen when we already know the drill."

"I don't know why I bother. You take far too many chances with your life, Bodie and one of these days your luck is going to run out." He threw up his hands in frustration. "You make me so mad, Bodie. Sometimes I feel like knocking you into the middle of next week!"

"OK, Ray. I'll go to the hospital on one condition."

"I don't think you're in any condition to bargain, mate, but go on then."

"Tell me what's got you so worked up and don't blame it on me being a selfish idiot or leaving you to carry the can. There's more to it than that."

"You're right, there is." Doyle sighed in defeat and thought carefully about how he would broach the subject.

Bodie sat on the edge of his bed and waited patiently for his partner to continue. He thought about getting dressed but his chest, back and head were throbbing mercilessly. Doyle could see the effort his partner was making not to pass out or throw up; he was not sure which would come first, so he grabbed Bodie's trousers and knelt down, intent on helping his lover into them.

"You're stalling, Ray," he said as he put one leg in and then the other. He stood carefully and Ray pulled up his trousers and began fastening his fly. "Get off, you golly. Can dress meself can't I. Now quit stalling and tell me what's wrong."

Doyle looked into Bodie's eyes; eyes that were usually so full of mischief but now only held pain and genuine anguish. "Please, Ray," he prompted again.

"This thing we have between us, it's more than just sex for me, Bodie..."

"It's more than just sex for me too, mate," his partner interrupted.

"Is it?" he snapped. "I'm sorry. Look, what I'm trying to say is that you're everything to me, Bodie mate. And when I saw those explosives around your neck I..." he choked up for a moment but took several deep breaths in order to control the threatening tears. "I love you, you bastard!" He rubbed his eyes vigorously and without waiting for a reply he headed for the living room for a much needed scotch.

Bodie sat back down on the bed. Hard. He clenched his fists tightly and almost bit through his lip in an attempt to prevent himself from screaming. He mentally kicked himself for not going to the hospital straight off, but he hated hospitals and their stench of death and despair. He sighed deeply at Doyle's revelation. He wanted to shout back 'I love you too' but he was finding it harder and harder to concentrate through the pain. He panicked at the sudden thought that Doyle would take his hesitance as rejection and attempted to stand but his legs gave way and he crumpled to the floor. He lay motionless for a few seconds then managed to grab for a shoe that had long been abandoned. He took aim and launched it feebly at the door but his frail attempt fell short. He tried for a shout but it came out a croaky, "Ray!"

Bodie drifted in and out of consciousness for a few moments and was completely unaware of Doyle returning to his side. "Come on, mate, stay with me. Bodie!" A gentle tap to his face brought him round for a few brief moments.

Bleary eyes looked up at him. "I love you too, Ray. Always have, just never had the guts to tell you, 'm sorry."

"It's OK, sunshine." Doyle pulled Bodie close to his chest as gently and carefully as possible. "Ambulance is on its way. Don't talk but try and stay awake for me OK?"

"I know you are. But don't you ever do anything like that again, Bodie. Do you hear me?"

"Good." He ran his fingers through Bodie's hardly there hair and took a deep breath in order to control his conflicting emotions. He shook his head in an attempt to rid himself of the vision of Bodie almost being blown to smithereens. A shiver ran through him at the thought that he may never have had the opportunity to tell his idiotic partner how he truly felt.

"You always have had, sunshine but you were just too pig-headed to notice."

"I know," his partner replied sleepily. "But there's just one thing, sunshine."

"You're telling The Cow!"

1 guest left kudos on this work!